Celebrate Presidents’ Day with books that demystify and recognize the important role of POTUS and the distinguished individuals that have served in our country’s highest office. There are great selections for pre-K and up, so we hope you enjoy this list of our favorite president books for kids. You may spark a hearty discussion or maybe even inspire your students to run for office someday!

(Just a heads up! WeAreTeachers may collect a share of sales from the links on this page. We only recommend items our team loves!)

This newer addition to a throwback series provides a straightforward account of how George Washington came to be the first president of the United States. It also shares humanistic details such as his love of fishing and horseback riding and includes a tame overview of the Revolutionary War. It reads as an engaging narrative, making it a reliable read aloud for teachers of young students around President’s Day.

2. P is For President by Wendy Cheyette Lewison, illustrated by Valerio Fabbretti

This author obviously has a lot of experience explaining complex concepts to very young children. Without requiring additional teacher explanation, this book covers all the basics about the role of President of the United States, from how one is elected to how he—or potentially she, the text makes clear—spends the day. Memorable quirky facts, like how one president had a pet alligator, round out the more general ones.

3. If I Ran For President by Catherine Stier and Avril Lynne

What would it be like if you ran for president? What would it feel like to wait for the results on Election Day? Spark a great conversation with students with this multicultural and inclusive book that explores everything from starring in commercials and seeing your face on bumper stickers to traveling in your own campaign bus!

4. If I Were President by Catherine Stier and Diane DiSalvo-Ryan

What would you do if you were president? What exactly does a president do? Kids might love hearing about the perks of living in the White House where a private chef prepares all their meals, and they can go bowling anytime they want—but what would it really be like to be in charge of the military, give important speeches, and work with Congress to create laws for the whole country? Use this book to start a thought-provoking and eye-opening classroom discussion!

5. I Am George Washington by Brad Meltzer and Christopher Eliopoulos

George Washington was known for his courage. He was never too afraid to be the first to try something—even when it was time to become the first leader of a brand new nation, the United States of America. This book includes a helpful timeline of Washington’s history and colorful cartoon illustrations to bring the story to life.

6. I Am Abraham Lincoln by Brad Meltzer and Christopher Eliopoulos

We know that Abraham Lincoln often spoke about fairness, but how did he become the president who abolished slavery? This colorfully illustrated book follows Lincoln from childhood to the White House, including the Civil War and his legendary Gettysburg Address.

7. What is the President’s Job? by Allison Singer

This nonfiction reader gives standard information about the presidency, with special attention to the different facets of the job, like working with Congress and other world leaders, acting as commander of the armed forces, and upholding various traditions. What sets this title apart is the collection of engaging photographs, which give students an insider perspective on the highest office in the land.

8. Abe Lincoln: His Wit and Wisdom From A-Z by Alan Schroeder Illustrated by John O’Brien 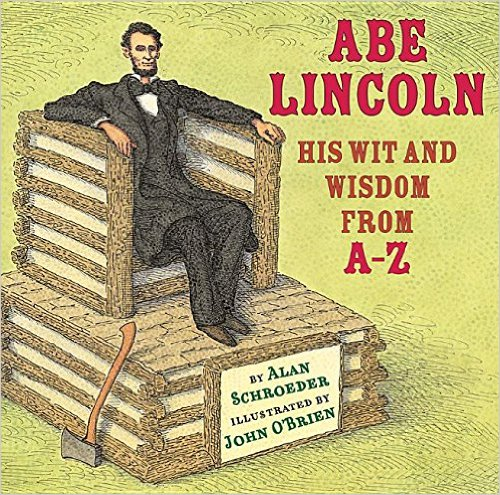 This clever book focuses on our popular 16th president in an alphabet book format. Included is a wealth of information about the life and accomplishments of Abraham Lincoln from childhood through his early career to his tenure as president.

9. My Teacher for President by Kay Winters and Denise Brunkus

After learning about the president’s job, Oliver is sure his teacher would be the perfect candidate. She’s used to being followed everywhere, loves white houses, finds jobs for people, attends a lot of meetings, and believes in peace. This heartwarming book includes illustrations of Oliver’s teacher during a typical school day contrasted with scenes where she’s carrying out presidential duties.

10. Looking at Lincoln by Maira Kalman and Elizabeth Cottle

Who was Lincoln really? This little girl wants to find out. She discovers that our sixteenth president was a man who believed in freedom for all, loved Mozart, apples, and his wife’s vanilla cake, and even had a dog named Fido! Lincoln also kept his notes in his famous hat. From his boyhood in a log cabin to his famous presidency and untimely death, this book shares Lincoln’s remarkable life with young readers in a fresh and exciting way.

11. Ellie May on Presidents’ Day by Hillary Homzie and Jeffrey Ebbeler

How far will Ellie May go to be chosen as class flag leader during the exciting week leading up to Presidents’ Day? The quirky and funny second-grader enjoys learning about U.S. presidents but absolutely loves the idea of being class flag leader during the week before Presidents’ Day. Tired of not being chosen to hold the flag, she makes it her mission to finally get picked. Along the way, Ellie May realizes that honesty and patience go a long way. 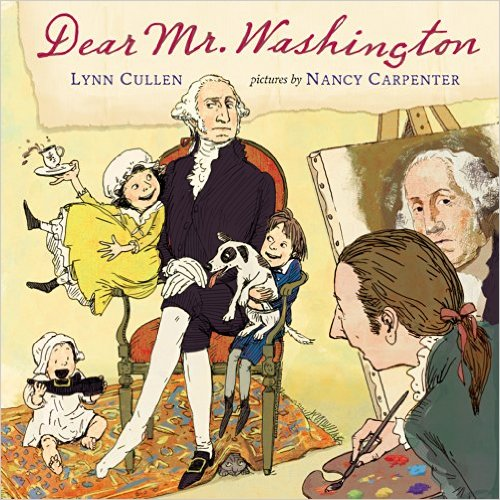 A charming story centered around George Washington’s correspondence with young Charlotte Stuart and her siblings. As her father (prominent painter Gilbert Stuart) attempts to paint Washington’s portrait, the children’s shenanigans throw the process off course. This storybook is colorful, funny, and full of calamity!

13. Thomas Jefferson: Life, Liberty and the Pursuit of Everything by Maira Kalman 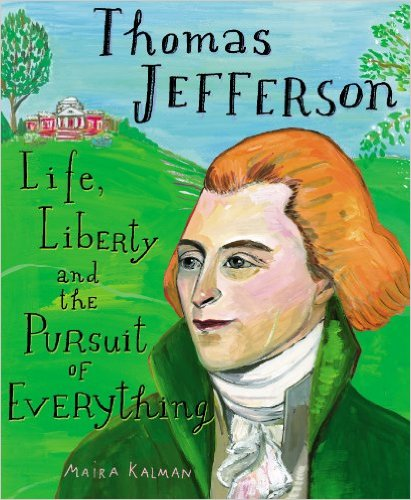 Thomas Jefferson, our third president, accomplished great things during his tenure as president of the United States, from writing the Declaration of Independence and doubling the size of the U.S. with the Louisiana Purchase to establishing the Library of Congress. He was widely renowned as a true Renaissance man—interested in music, language, science, nature, math and architecture. Maira Kalman’s alluring text and dazzling illustrations bring this president’s remarkable, complicated personality to life for young readers. 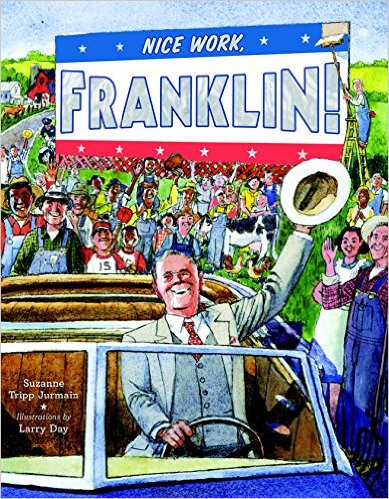 A man of tremendous personal fortitude, Franklin Roosevelt was elected to an unprecedented four terms as the president of the United States. Famously stubborn, with strong humanitarian views, FDR served our country in times of worldwide economic depression and war. His accomplishments as president largely redefined the role of government in our country.

15. What Presidents Are Made Of by Hanoch Piven 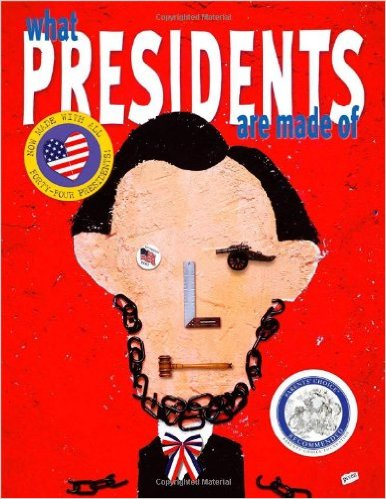 A visually amazing book that weaves anecdotes of the charismatic personalities of some of our prominent presidents with whimsical collages made of everyday objects such as jelly beans, hot dogs, bullets, and more.

16. Who Was Theodore Roosevelt? by Michael Burgan, illustrated by Jerry Hoare and Nancy Harrison 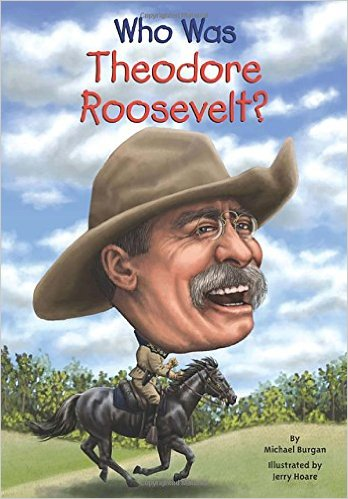 Teddy Roosevelt had many “firsts” in his career as our 26th president. In addition to being the youngest president ever elected, he was also the first sitting president to win the Nobel Peace Prize, to ride in an automobile, and to fly in an airplane! In addition to his accomplished presidency, TR was also famous for being a naturalist, hunter, explorer, author, and soldier.

Chief Official White House Photographer Pete Souza organizes this collection of photos and reflections around themes such as “Be Kind and Respectful,” “Make Time for Family,” and “Show Compassion,” making for a different take on the role of President than traditional nonfiction titles. Many photos are an invitation to discuss not only the significance of Barack Obama’s presidency but other aspects of history as well; there are many classroom conversations to be had about this unique and gorgeous book.

18. Who Was Woodrow Wilson? by Margaret Frith, illustrated by Andrew Thomson and Nancy Harrison

Former professor, university president, and governor of the state of New Jersey, Woodrow Wilson served two terms as president during a tenuous time in our country’s history. He was a born leader with progressive ideas who lived a life of magnificent accomplishment as well as a heart-breaking personal tragedy.

David Stabler introduces this title by promising, “This book proves that any kid can grow up to be president. Because every U.S. president started out as a regular kid. Just like you.” The relatable anecdotes describe former leaders’ childhood hobbies, pranks, and run-ins with bullies.

This is the first in a series that continues the trend of aiming to engage students in the informational text using a graphic novel format. Narrator Noah His-Turkey, pardoned by the White House and passionate about historical truth, shares childhood anecdotes, Revolutionary War sequences, and doesn’t avoid details like the fact that Washington owned slaves. (The text also includes judiciously placed fart jokes to up reader appeal.) Also available: Action Presidents #2: Abraham Lincoln!

21. Rutherford B. Who Was He? by Marilyn Singer and John Hendrix

Best for: Grades 4 and up 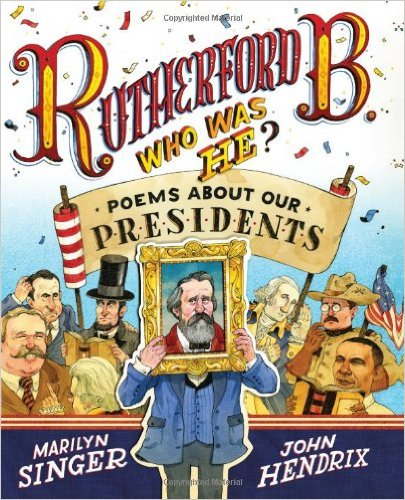 A fun collection of sassy illustrated verses that takes a new look at the 43 American presidents. Packed with facts and historical references as well as human interest elements, the rhythmic, rhyming verse is sure to amuse and inform everyone who reads this book.

22. Our Country’s Presidents: A Complete Encyclopedia of the U.S. Presidency by Ann Bausum

This great resource is organized chronologically with a plethora of timelines, lists, sidebars, and fun facts to lighten the text. A highly visual text, it boasts a vast collection of art reproductions, maps, historical documents, charts, and photos. It’s updated to include information about the controversial 2016 election and 45th president.

What are your favorite president books for kids?  Share in the comments below!

Want more book suggestions? Make sure to subscribe to our newsletters.